An NHS worker has been seriously injured in a racially aggravated hit and run attack in Bristol.

The unnamed 21-year-old man suffered a broken leg, nose, and cheekbone in the attack and will require plastic surgery to his face and leg.

Avon and Somerset Police said the incident is being treated as “racially aggravated,” adding that the victim could have been killed.

Witnesses told police that a Honda Accord was deliberately driven at the victim as he walked on Monks Park Avenue in Southmead, at about 4.30pm on Wednesday, July 22, after finishing his shift.

It is alleged that the men apparently shouted racist abuse at the victim, before running from the dark blue Honda Accord.

The man, who works at Southmead hospital, asked not to be named for private reasons but has allowed photos of injured face and a broken leg to be released.

He was rushed to the hospital following the incident but was discharged the following day after he underwent surgery to remove shards of glass from his face.

The man who was also a footballer has since been discharged and wants to raise awareness about racism.

“I don’t feel safe to walk outside and I can’t play football, record my music, go to the gym or even sleep – I have to try to sleep sitting up,” he said. 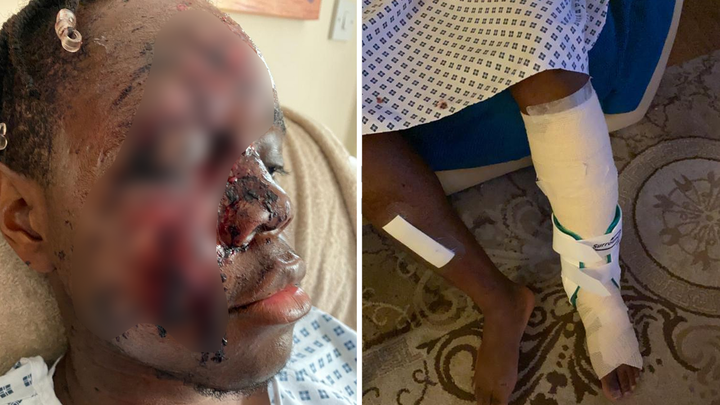 “I am lucky to be alive. I want to make sure it doesn’t happen to any other person. I want to raise awareness about racism and I want people to stop this hatred.

“These men and this attack do not represent Bristol. Bristol is made up of so many different communities and I know so many great people. I have been overwhelmed by all the support I have received both at the scene when it happened and since from friends and the local community.

“I want to thank the witnesses who came forward and those who helped look after me and get me to hospital I want to thank the doctors and nurses who have done all they can to treat my injuries. I want to thank the police for all they are doing to try and bring these offenders to justice. We will bounce back as a family, this will make us stronger. We won’t let the haters win.”

Insp Lorna Dallimore said: “This is a shocking incident in which a vehicle was deliberately driven at the victim and racist language used following the collision.

“I understand and share the concerns people have about this incident. We’re talking with community leaders, the local authority and Sari [the Stand Against Racism & Inequality charity], but we have no evidence to suggest there is a wider risk to the public.

“The individual was left with some very serious injuries. However it could have been far more serious and potentially resulted in a fatality. Incidents like this are thankfully very unusual and Horfield and Southmead are diverse and welcoming areas.”

Lady narrates how she transitioned to male and back to female after ‘God’ told her that her purpose in life is to be a ‘hot b!tch and a prostitute’ (video)

“This is how he celebrated you. Please rescue him” – Man begs Buhari as he shares photo of aid worker abducted by Boko Haram giving the 4+4 re-election sign

A Nigerian photographer and humanitarian, Mohammed Chiroma on Thursday, January 21, shared a photo of abducted …