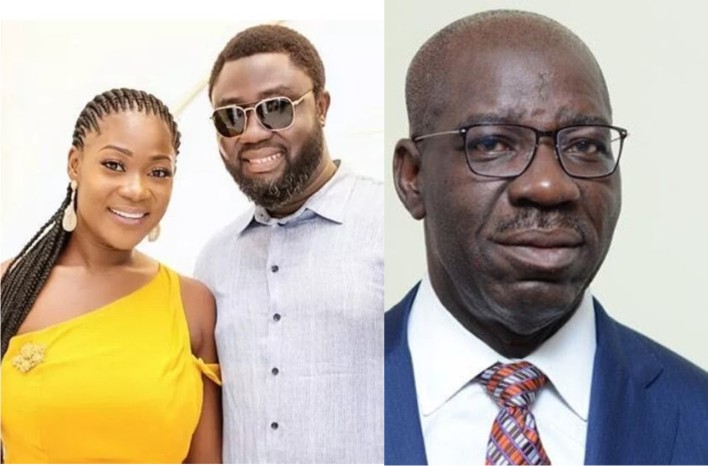 Actress Mercy Johnson Okojie’s husband and former aspirant for federal house of representatives, Prince Odi Okojie has shared his ordeal with the present Governor of Edo state, Obaseki, whom he referred to as “the dictator and the Idi Amin of Edo State”‘

Prince Odi, who was a key player, as an aspirant for the National Assembly election, during the last election process in the state, has claimed that the governor ‘stole’ his mandate and gave it to someone else for reasons best known to him and that it would have been nearly impossible for them to have recorded such number of votes for President Muhammadu Buhari in Edo State, during the last presidential election, if not for the timely intervention of Comrade Adams Oshiomole.

“For the benefit of those who are good students of history, in October 2018 just before the 2019 general elections, the NWC of APC adopted the Direct Primaries method for the National and State Assembly elections in Edo State.

I was a key player in that election process as an aspirant for the National Assembly elections. Ordinarily, I would have preferred the indirect primaries, because, one would be able to play around and interact one on one with the delegates by way of persuation, negotiation and lobby.

But the Governor and the former Edo State APC Chairman, Aslem Ojezua advocated tirelessly for the direct primaries in agreement with the NWC on the mode of Primaries in Edo State. .
On the other hand, I was extremely excited when the direct primaries method was adopted. I knew it was going to be the case of a popularity contest, considering my political sophistry. I also enjoyed the overwhelming support of my party leaders within the Federal Constituency I was to represent. As a grassroot mobilizer, the leading aspirant and the most acceptable, i was prepared and ready for the direct primaries having campaigned vigorously and tirelessly within my federal Constituency.

The good news was that i did won the primaries. But very unfortunately, the dictator and General Obaseki the Idi Amin of Edo State, gave my mandate to someone else for reasons best known to him. Sadly, all the candidates handpicked by the Emperor Governor Obaseki lost woefully to the opposition PDP. It would have been nearly impossible for us to record such number of votes for President Muhammadu Buhari in Edo State if not for the timely intervention of Comrade Adams Oshiomole, who enjoys the love and enormous support of Edolites.

It is on record that I was the only leader that won his polling unit, ward and by…

When you point a finger at someone, don't forget the remaining four fingers are pointing back at you. It is called KARMA @governorobaseki

Previous Two Arrested For Stealing Female Underwear In Osun
Next Davido gifts the graphic designer who photoshopped this picture of him and Wizkid together, the sum of ₦1 million.. (Video of the boy’s mother praying for Davido)